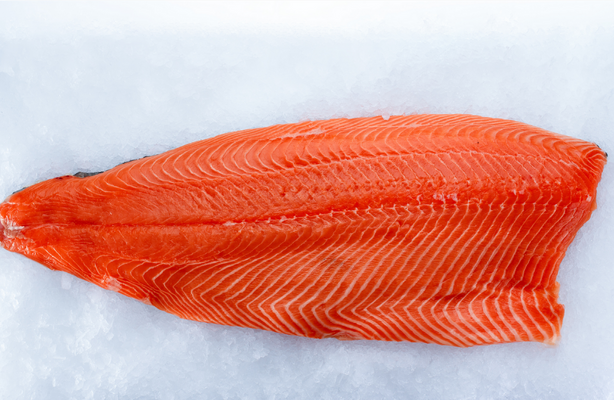 It’s December and Time for Holiday Parties! What Seafood Can You Count on?

Thankfully, with Thanksgiving behind us, business will start to pick back up, and we should begin to see an increase in holiday parties. Which seafood items can you “bank on,” and which items are a “definite maybe”?

Faroe Island Salmon- We are very proud of our Atlantic salmon. It is grown in the frigid waters of the North Atlantic surrounding the archipelago of the Faroe Islands, part of the Kingdom of Denmark, between Iceland and Norway. The high oil content of Faroe Island salmon makes the flavor of this salmon stand out from the crowd. The fat content holds the perfect amount of moisture. A cutting machine utilizing computer technology cuts our 6 oz portions with the accuracy of up to 1/10th of an ounce!

Fresh Venezuelan Crabmeat- Venezuelan crabmeat will be the dominant force this month in the crab world. In November, the government jumped into the “fray” and halted crabbing for three weeks. That is a good thing because it is a form of conservation, leaving crabs in the Lake until we need them in December. Fresh pricing will likely remain attractive, hovering around the $20/lb mark all month on jumbo and under $14/lb on lump. Fresh super claw will be $11/lb or less.

Local Crabmeat- Done for now. For those of you who require local meat this winter, we currently. have an adequate supply of nitro-frozen Maryland lump and jumbo lump. Pasteurized Crabmeat Market- Experienced a bit of a rebound recently. Pasteurized jumbo is still under $25/lb, with pasteurized lump in the mid-teens. We doubt this recent “rally” in pasteurized pricing has “legs” in 2023.

Local Wild Rock- This is close to a “sure thing” this month. The Maryland drift gill-net season starts December 1. Plenty of quotas are left, so prices will be reasonable about where they are currently. Virginia fishermen will be tagging fish as well, so put it on the December menu with confidence.

Local Wild Blue Cat- These invasive beasts will bite hard until the rivers freeze in January, so sell the heck out of them this month.

Other Finfish- Domestic genuine American red snappers are available most of the time, but because they are caught by relatively small boats (40-60 ft), they are subject to weather fronts. The same can be said of Black Grouper. There will be plenty of Mahi and local fluke available at good pricing all month once the boats get back into rotation. Fluke pricing will normalize at around $12/lb on fillets. Wild Halibut from eastern Canada and Norway is well over $20/lb on fillets now and showing no sign of dropping this month. Air freight on Bronzino can get a little tricky around the holidays but, in general, Bronzino supply this month should be excellent.

Oysters- Local wild oyster season on the Chesapeake Bay is in full swing. It’s an easy item to promote with a great backstory. Shucked gallon prices came off some last week. They will probably drop again after the first of the year. We have 25 varieties of 1/2 shell oysters from around the world.

Scallops- We have all sizes in stock, and supply is steady. U/8’s, U/10’s, U/14’s, 10/20’s, and scallop chunks round out the fresh sea scallop category. We also have 40-60 count dry Peruvian bays. Don’t forget our local live bay scallops in the shell grown in Chincoteague Bay.

Squid & Octopus- We have all sizes of premium Spanish octopus in-house (1-2, 2-4, 4-6 & 6-8) along with wide varieties of freshly cleaned squid (T&T, R&T, R.O.). Our domestic Sea Fresh ring & tentacle is considered the best-frozen loligo squid on the market.

Live Maine Lobster- Best quality lobster of the year is right now. Current lobster prices are cheap, and with the largest areas in Canada opening this week, there is the potential for prices to fall further. It has been a few years since live lobster was a value during the holiday season, but we think that the “stars are lining up,” and it could actually happen this year. CQH or chix, quarters, and halves are the value right now. Larger lobsters (1.75 to 3 lb) are in demand the most during the holidays and currently going for big money ($12/lb) and will most likely go higher for Xmas and NYE. So the value is in CQH.

Lobster Tails & Lobster Meat-  These are two great holiday items to feature. Both are very affordable. C.K. is only $1.75 per ounce. Downeast brand Canadian coldwater lobster tails 3-4, 4-5, and 5-6 ounces are going for $1.25 per ounce. Larger tails (7-8 and 8-10) are approaching $2 an ounce. We will have plenty in stock throughout the holiday season.